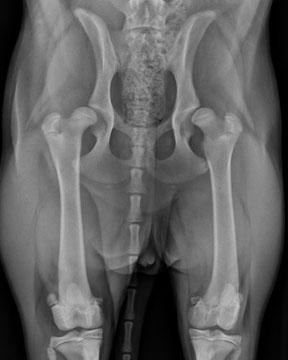 Triple pelvic osteotomy (TPO) remains a valuable surgery in the prevention of degenerative joint disease secondary to hip laxity. The surgeons at DVSC recommend that hips of susceptible breeds be palpated beginning at 4-6 months of age. If laxity is detected, owners should be informed about the benefits of the TPO procedure.

The basis of the TPO procedure is to eliminate hip joint laxity, and consequent lateral movement of the femoral head within the acetabulum (subluxation). The lateral movement is what causes pain and degeneration in the joint. Elimination of this movement is achieved by rotating the acetabulum over the top of the femoral head. Three cuts are made in the pelvis, one each in front of, medial to, and behind the acetabulum. A specially designed plate is applied to the ilial cut that rotates the acetabulum 20, 30, or 40 degrees, as required for stability. The bone cuts (osteotomies) heal but strict exercise restriction is required until healing is complete.

A TPO may prevent the patient from requiring a more expensive procedure in the future, such as a total hip replacement, or a procedure with less predictable results, such as a femoral head/neck ostectomy. The patient may do well without the surgery, but having the procedure performed will significantly reduce the likelihood of long-term problems.

We have performed concurrent bilateral triple pelvic osteotomies in a few dogs, however most dogs requiring the procedure bilaterally have the surgery staged at 4-8 week intervals. Some of our patients also require surgery on only one hip. With careful

screening and selection of TPO candidates, we expect that the TPO will provide a permanent resolution to the problem.