Hemoabdomen, or hemoperitoneum, is an accumulation of blood in the abdominal cavity. The condition is a common reason for emergency presentation of pets to the veterinary hospital. While hemoabdomen does occur in cats, it is a more commonly seen condition in dogs. Any age or breed of dog or cat may be afflicted with this condition.

Hemoabdomen may result from traumatic or non-traumatic causes. Traumatic hemoabdomen may result from blunt force, such as automobile trauma or falling from a height; or from penetrating trauma, such as attack by another animal or a gunshot or knife wound. Non-traumatic causes of hemoabdomen include gastric dilatation and volvulus (GDV/bloat, with subsequent tearing of the short gastric vessels), liver lobe or splenic torsion, and coagulopathies (clotting disorders). However, the most common cause of non-traumatic hemoabdomen is a bleeding intraabdominal mass.

Patients with hemoabdomen are often presented to their veterinarians because of signs secondary to blood loss. Patients suffering from traumatic hemoabdomen may also be presented due to other signs of trauma. Owners’ reasons for bringing their pets to the veterinarian may include vague signs, such as lethargy, anorexia, or vomiting. More commonly, owners will complain of an episode of weakness or collapse, and sometimes intermittent bouts of weakness or collapse (if there is intermittent bleeding). Some owners will notice that their pets have a distended abdomen or pale mucous membranes. Occasionally, acute death is noted without any preliminary sign of illness.

Physical examination findings are often indicative of some degree of shock (decreased perfusion to the body’s tissues) secondary to blood loss, and are variable depending on the stage of shock.  Mucous membranes are generally pale, heart rate is elevated, and pulse quality is variable but may be weak. A distended abdomen may be noted, and occasionally an intraabdominal mass may be palpable. Other injuries may be found in cases of trauma.

If the veterinary team is suspicious that a patient is bleeding, they will likely want to perform tests to further determine the underlying cause. Initial diagnostics performed may include electrocardiogram (ECG), blood pressure measurement, blood work, and imaging tests. Findings are often variable depending on the degree of bleeding. Generally, though, these tests will confirm the presence of anemia (low red blood cell concentration) due to blood loss, and imaging studies (x-rays and/or ultrasound) will confirm the presence of fluid in the abdomen. In some cases, an underlying reason for the fluid, such as a mass, may be visualized with abdominal ultrasound. A sample of the fluid may be obtained to confirm that the fluid is, in fact, blood. The veterinarian may take x-rays of the chest to check for any abnormalities, including signs of trauma if the animal is injured or evidence of tumor spread (metastasis) to the chest in non-traumatic cases (as an intraabdominal mass is the most common cause of bleeding in these cases). Finally, coagulation testing may be performed, if available, to rule-out a clotting disorder due to rodenticide (rat bait) ingestion or other diseases. 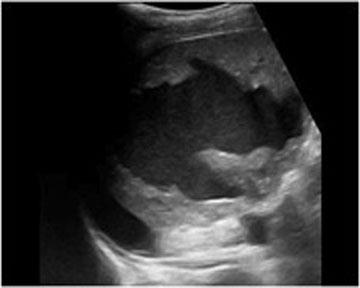 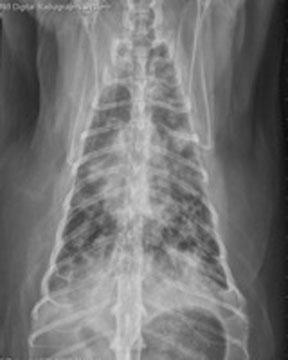 While diagnostics are being performed to determine the cause of the pet’s disease, the veterinary team will providecare in attempt to stabilize the pet. This will usually require placement of one or more intravenous catheters for administration of fluids, pain medications, and other drugs. Many of these patients will also require a blood transfusion at some point during their care in order to replace the blood that has been lost. It is important to mention any previous medical history or concurrent disease to the veterinary team, as well as any medications that your pet takes, as this may affect the treatments that are provided. It is especially important to let the staff know if your pet has had a previous blood transfusion, as this will limit the types of blood products that your pet can receive safely and will mandate special testing of your pet’s blood prior to administration of a transfusion.

If a pet experiences bleeding into the abdomen secondary to trauma, surgery may or may not be required. Bleeding secondary to blunt trauma may stop on its own and may be successfully treated without surgery; if the bleeding is severe or will not stop on its own, surgery may be required. Patients with non-traumatic hemoabdomen will usually require surgery to definitively determine the cause of bleeding and get the bleeding stopped. If a clotting disorder is ruled out by laboratory testing, nearly all other causes of non-traumatic hemoabdomen require surgery to fix. As has been mentioned previously, the most common cause of bleeding in these cases is a tumor that has ruptured. Prior to surgery, the veterinary team will do their best to gather information on the underlying cause of bleeding in order to help the owners make a decision about whether or not to proceed with surgery. However, in many cases, the cause of bleeding cannot be determined until surgery is performed, and owners should be prepared that the surgery team may or may not be able to successfully stop the bleeding surgically.

If surgery is elected, an abdominal exploratory surgery is performed. The spleen and liver are the two organs mostly commonly found to be bleeding, often because of a ruptured mass. However, any abdominal organ or structure may be found to be the cause of bleeding. The goal of surgery is to stop the bleeding, generally by removing the structure responsible. Most of the time, splenectomy (removal of the spleen) or liver lobectomy (removal of an affected liver lobe or part of a lobe) are indicated. The procedure may be accomplished with sutures, specially designed staplers, or cautery devices. If a mass is found, the abdominal cavity is also examined closely for any signs of metastasis (spread) of the tumor to other organs. 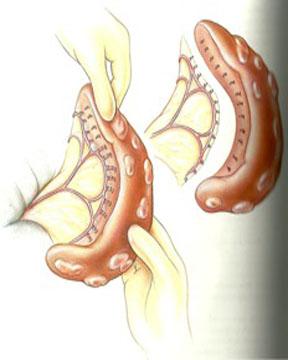 Following surgery, patients require intensive care to treat any continuing symptoms of blood loss and to control post-operative pain. Patients suffering from traumatic hemoabdomen may require additional surgeries to treat other injuries. Patients with non-traumatic hemoabdomen generally do well in the short-term as long as there are no complications from surgery. Long-term prognosis will depend on the underlying cause of hemoabdomen. Patients with benign (non-cancerous) disease often have a good prognosis. If a mass is found to be the cause of bleeding, approximately 2/3 of those masses are found to be malignant (cancerous), and roughly 2/3 of malignant tumors are determined to be a specific cancer of the blood vessels called hemangiosarcoma. Life expectancy for patients with hemangiosarcoma is in the range of several months, though survival times are variable depending on the individual patient and on pursuit of additional treatments such as chemotherapy. Happily, even patients with hemangiosarcoma or other cancers can resume a relatively normal quality of life following surgery until metastatic lesions start to bleed, at which time euthanasia is generally elected.