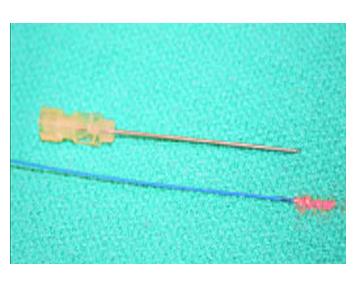 Percutaneous Laser Disc Ablation (PLDA) is a minimally invasive preventative procedure for thoracolumbar degenerative disc disease in dogs. This procedure was developed by Dr. Kenneth E. Bartels at Oklahoma State University. Hundreds of dogs have undergone percutaneous disc ablation since the procedure was clinically introduced in 1993. PLDA is recommended as a preventative procedure to reduce the risk of disc extrusion into the spinal canal in dogs with a prior history of disc disease, or for dogs that are at a high risk of disc rupture like dachshunds (chondrodystrophic breeds). The procedure has been found to be over 97% effective with only 9 dogs (2.6%) over a 10 year period having recurrence of signs that required surgical intervention. All nine dogs recovered uneventfully.

1. A surgeon meets with the pet owner to explain the procedure, benefits, risks, and after care. A pre-surgical workup is performed as warranted for each dog (blood work and spinal radiographs). 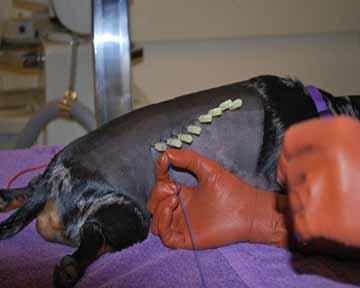 2. Dogs are given a pre-surgical evaluation, anesthetized, and aseptically prepared for laser disc ablation.

3. Eight needles are placed through the skin into the center of eight disc spaces in the back. An intraoperative radiograph is used to visualize placement of the needles. 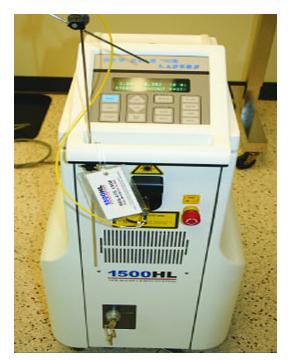 Candidates for PLDA include dogs that have a history of disc disease that have recovered fromn either surgery or medical management and are neurologically stable; and dogs that are in a very high risk group such as Dachshunds (chondrodystrophic breeds). Dogs that are exhibiting back pain but are not neurologically affected should be treated with medical management and should be pain free and drug free for a minimum of two weeks.

The patients normally stay in the hospital one night and are discharged with pain medication. The dogs should be kept under strict cage confinement for the next 2-3 weeks and then may slowly return to normal activity over a 1-2 week period.

Find out if your pet is a candidate for PLDA. Please call DVSC-North Dallas at 972.267.8100 to schedule an appointment.