Medial Patella Luxation
What is a medial patella luxation?
Medial patella luxation (MPL) is a common cause of orthopedic lameness in both small and large breed dogs.  In the simplest terms this condition is when the patella, or “knee cap”, slips in and out of its natural position.  Normally the patella sits in a groove in the femur and does not move side to side.  However, sometimes the patella will be pulled out of this groove, or luxate.  The image below illustrates the comparison between the normal canine stifle (knee) and one with a patella luxation. 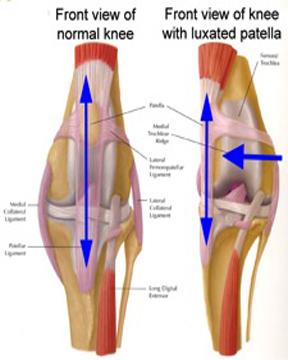 MPL can vary in severity and because of this we have developed a classification scheme for luxation.  Patella luxation is graded I, II, III, and IV.

Grade III patella luxation – the patella is generally located outside of it’s correct anatomic position at all times, but can be pushed back into the groove if necessary

Grade IV patella luxation – the patella is permanently luxated and it is impossible to return to patella to it’s proper anatomic position.  Many of these dogs also have deformities of their femur and tibia as well. 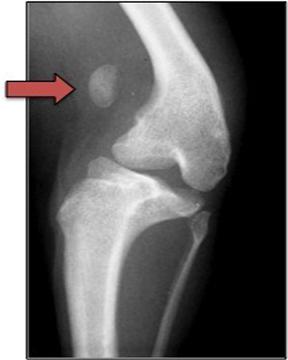 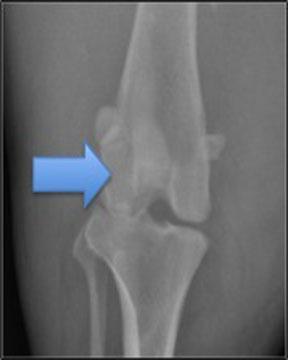 The radiographs above show a normal canine stifle and a stifle with a Grade IV patella luxation.  On the normal radiographs the patella, indicated by the blue arrow, is difficult to see as it lies on top of the femur.  In the Grade IV MPL the patella, pointed out by the red arrow, is “floating” in space instead of being properly positioned over the femur.  In addition, the femur and tibia are abnormally curved.  All of this results in hind limb deformity and persistent lameness or an abnormal gait.  (Courtesy Dr. Sharon Kerwin of Texas A&M University)

What are the clinical signs associated with medial patella luxation?
Not all MPLs are problematic.  Many small dogs are diagnosed with MPL that do not result in clinical problems.   The classic breeds are Yorkshire terriers, Chihuahua, and Toy Poodles, but any small breed dog should be examined for this condition.  Large breed dogs can also develop this condition, most notably Labrador Retrievers.

In some instances dogs will limp as a result of patella luxation.  When lameness is noted surgical correction is indicated.  Medical management with anti-inflammatories can be tried initially, but is generally ineffective because the disease will only continue to progress as mechanical alignment worsens.  Over time arthritis can result which could have been prevented with early surgical intervention.  For these reasons surgery is indicated for most Grade II dogs with lameness, and any dogs diagnosed with Grade III and Grade IV MPL.

MPL can cause a classic “skipping lameness” where the patella pops out causing the dog to lift the affected pelvic limb and skip on 3 legs.  Once the patella returns to its normal anatomic position the lameness will resolve and the animal will go back to walking normally.  This is common in dogs with Grade II patella luxation.  Others with grade III and grade IV MPL will often have a more consistent lameness.  Patella luxation also leads to progressive formation of osteoarthritis in the stifle joint, which can further add to the pain and lameness.

It has also been recognized that MPL will place strain on the other stabilizing ligaments in the canine stifle, most importantly the cranial cruciate ligament (similar to the ACL in people).  It is common for a dog with MPL to be diagnosed with a concurrent tear of their cruciate ligament. 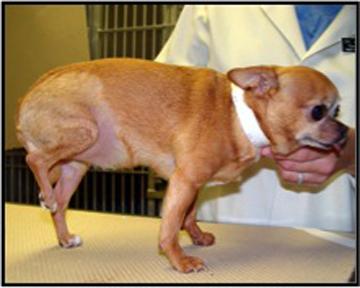 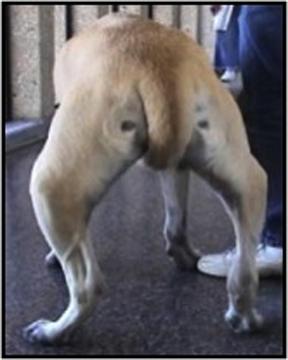 Several abnormalities have been implicated in the cause of medial patella luxation including abnormal placement of the quadriceps muscles, abnormal angulation of the head of the femur, and others.

How is medial patella luxation treated?
Surgical correction of MPL generally requires several procedures used in combination.  The most commonly performed procedures are that of tibial tuberosity transposition, deepening of the femoral groove, and soft tissue modification of the joint capsule.  The goal with all of these procedures is to re-align the patella and quadriceps and re-establish straight line force down the pelvic limb.

Deepening of the femoral groove is illustrated below.  A deeper groove makes it more difficult for the patella luxate. 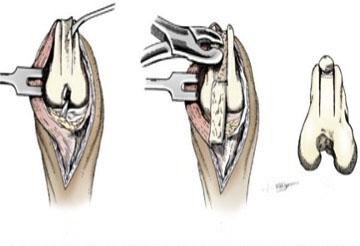 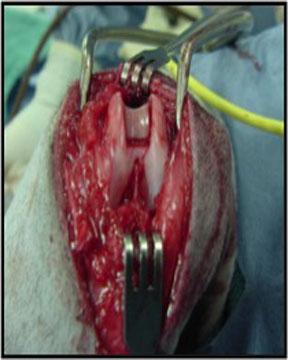 A tibial tuberosity transposition is a procedure in which the insertion of the patellar ligament is moved to assist with re-alignment of the patella.  In order to do this a small portion of the bone is cut and moved laterally in direction.  For this to heal one or more pins and sometimes wires are required to stabilize the bone fragment. 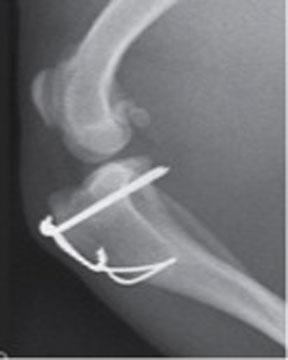 In large breed dogs an angular deformity of the femur, termed femoral varus, is commonly identified.  If femoral varus is significant then correction is often required in addition the procedures listed above.  Correction of femoral varus correction is performed by removing a wedge portion of bone from the femur, known as a distal femoral osteotomy, and then stabilized of the bone with a plate – as is common with fractured bones. 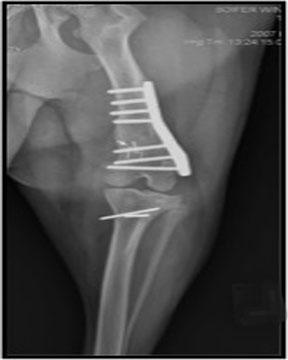 This shows a post-operative radiograph of a dog that had a femoral varus correction performed.  A tibial tuberosity transposition was also performed as noted by the pins located beneath the stifle joint. (Courtesy Dr. Sharon Kerwin, Texas A&M University)

What is the prognosis associated with medial patella luxation?
In general the prognosis is very good for MPL in both small and large breed dogs.  Surgical success rates up to 90% have been previously reported.  The grade of luxation and age of the dog will often have some influence on functional outcome.  In cases of young dogs diagnosed with grades I, II, and III outcome is usually good.  Cases of grade VI luxation are more variable as the deformities of the pelvic limb are often the worse.  Older dogs will typically have more osteoarthritis as well. In many instances physical therapy is essential to maximize the functional outcome in older dogs and more severe MPL grades.

Complications can occur with MPL correction but often are minor such as incisional swelling or superficial infection.  Sometimes implants must also be removed if they migrate from their original position.  The possibility of any complication occurring is greatly minimized by exercise restriction post-operatively and making sure the patient is unable to lick or chew at the incision.