The canine hip is a “ball and socket” joint between the pelvis and the femur. The head of the femur makes up the ball part of the joint, which articulates with the acetabulum (cup) within the pelvis (Figure 1). The head of the femur and the acetabulum are held together by various soft tissue structures, including the joint capsule, ligaments, tendons, and surrounding musculature. In hip dysplasia, the femoral head and acetabulum do not fit together perfectly, causing instability of the joint. The instability leads to inflammation and remodeling of cartilage and bone associated with the joint, which in turn leads to irreversible arthritis. 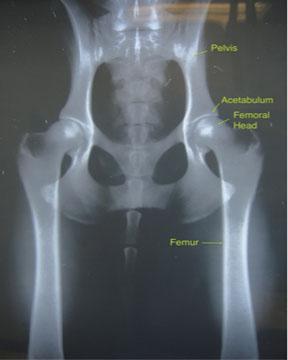 Hip dysplasia most commonly occurs in large or giant breed dogs. Breeds that are overrepresented include German Shepherds, Rottweilers, Labrador Retrievers, Golden Retrievers, and Saint Bernards. Clinical signs can vary in degree of discomfort from mild to severe.  There are two clinical forms of the disease – the juvenile form and the adult chronic form.

In the juvenile form, dogs develop lameness at a young age (5-12 months old). Puppies may have a “bunny hopping” gait, difficulty rising after rest, or reluctance to walk, jump, run, or climb stairs.  The acute discomfort in the juvenile form of hip dysplasia is a result of laxity in the hip joint that causes stretching and tearing of the soft tissues surrounding the joint. As these dogs age, the inflammation in the soft tissues around the joint causes thickening of the joint capsule and remodeling of the hip joint.

The chronic form of hip dysplasia has a highly variable onset of clinical signs. Some dogs never show discomfort or other clinical signs, and are diagnosed incidentally with x-rays. More commonly, an adult dog will present with slow, progressive hind limb lameness or discomfort. They may also have difficulty rising after rest, show reluctance to walk, run, or jump, or may have stiff hind legs after strenuous activity.

On physical exam, a dog with hip dysplasia may walk with a stiff, short strided gait. The muscles of the hind limbs may be atrophied (smaller than normal), and the dog may try to shift its weight to its forelimbs to alleviate stress on the hips. The dog may also display discomfort when the hips are manipulated through their range of motion, and may have decreased extension and flexion of the joint. A veterinarian can perform the Ortolani Test, in which the hip joint is manipulated in a particular way to test for laxity.

Radiography (X-ray) is the principle method for diagnosing hip dysplasia in veterinary patients. A normal canine hip radiograph is shown in Figure 1. Note the round femoral heads that are seated within deep round sockets (acetabulum). There is no evidence of separation of the joint or arthritis.

In the juvenile form of hip dysplasia, radiographs of the hips show a separation between the femoral head and acetabulum, indicating joint laxity (Figure 2). As the condition progresses, there may also be early signs of remodeling or flattening of the femoral head, and the acetabulum may become more shallow (Figure 3). In older dogs, there is often severe flattening of the femoral head, a shallow acetabulum, and signs of arthritis: abnormal bone formation, osteophytes (bone spurs), and collapse of the joint space (Figure 4). 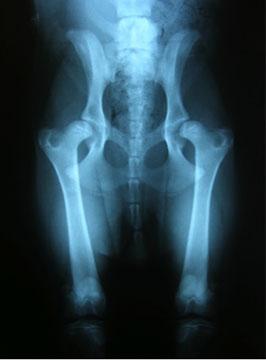 Figure 2: Radiograph showing a young dog with mildly subluxated hips as a result of joint laxity seen in the juvenile form of hip dysplasia. 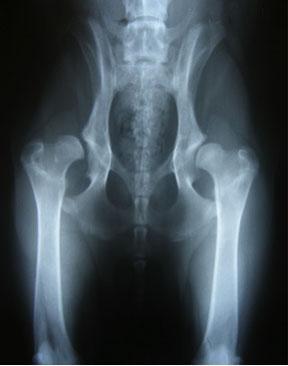 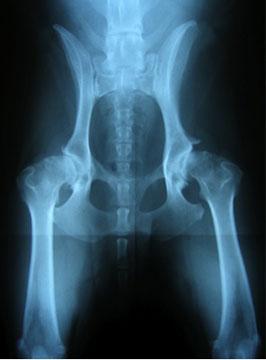 Non-steroidal anti-inflammatory drugs (NSAIDs) are the most commonly used analgesics in arthritic patients. Carprofen, meloxicam, deracoxib, and firocoxib are frequently prescribed by veterinarians in the United States. NSAIDs provide both pain relief and inflammation control by targeting specific cell mediators involved in joint soreness. NSAIDs can have adverse effects when use inappropriately, and should only be used as prescribed by a veterinarian.

Weight management plays an important factor in the management of hip dysplasia. Reducing body weight in dogs with hip osteoarthritis has been shown to decrease clinical signs such as lameness. A combination of a calorie restricted diet and exercise changes can be recommended by a veterinarian and individualized for each dog’s weight loss needs.

Regular, moderate, controlled exercise may be beneficial for patients with osteoarthritis. The amount of exercise a dog requires will depend on their level of discomfort and exercise intolerance. During periods of pain and lameness, exercise should be limited to house confinement and leash walking only outside for several weeks. This will allow inflammation in the joints to subside. After the initial rest period, controlled, non-concussive, strengthening exercise should be initiated. The best exercises to strengthen the muscles around the joints and improve function are swimming and straight line walking. Walking should begin slowly, for 10-15 minutes a day, gradually increasing to 30 minutes 3-5 times a week. The dog should be kept on a leash at all times. Swimming is ideal exercise for patients with arthritis, if possible. Again, short sessions of 5-10 minutes initially, then gradually increasing swimming time to 15-20 minutes over a several week period.

During the period of strengthening, dogs should not be allowed to run off leash, chase a ball, play roughly with other dogs, or do other concussive, strenuous activities. After weight loss is achieved (if necessary), and the muscle mass is stronger from the controlled exercise, then these activities may be allowed.

Rehabilitation therapy is proven to be of significant benefit in people with osteoarthritis. Our rehab specialist can teach you techniques you can do with your dog at home and can recommend an exercise program that may include the underwater treadmill.

Surgical options for hip dysplasia depend on the age of the dog and the extent of the disease at the time of diagnosis. For young dogs with immature skeletons, surgical options are intended to prophylactically improve conformation and stability of the hip joints to decrease the progression of hip osteoarthritis and decrease clinical signs. Procedures available to young dogs include juvenile pubic symphysiodesis and triple pelvic osteotomy. In older dogs with mature skeletons, surgical options are considered “salvage” procedures meant to eliminate osteoarthritis and associated pain by removing (femoral head and neck ostectomy) or replacing the joint (total hip replacement).

Each procedure is explained in more detail under individual sections.