Inevitably, pets eat things they shouldn’t. A gastrointestinal (GI) foreign body is any non-food item that alters the normal flow of materials through the gastrointestinal tract. Foreign bodies are a common reason for emergency presentation of pets to their veterinarian, and can be life threatening if not addressed in an appropriate manner.

When an animal ingests an item (food or otherwise), it passes from the oral cavity through the esophagus, and into the stomach. The stomach empties into the duodenum, the first part of the small intestine, and the item then continues on through the remainder of the small intestine (jejunum and ileum). Finally, the ingested item passes though the colon, or large intestine, then exits the body through the rectum and anus. If the item becomes stuck at any point along this path, it can cause obstruction of normal flow with subsequent backup of the GI tract. Even if a foreign object does not cause obstruction, it can cause significant irritation of the tissues as it passes through the GI tract. Either obstruction or irritation can produce gastrointestinal signs. 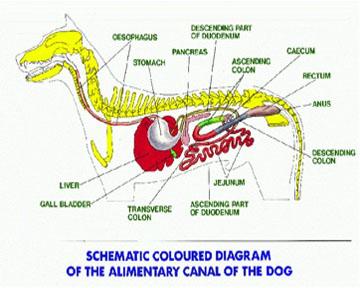 Occasionally, pets are brought to the veterinarian because an owner observes the pet(s) ingest an inappropriate item. More commonly, pets are presented for signs of gastrointestinal disturbance. The most common presenting complaints are vomiting and/or diarrhea, though more non-specific signs like lethargy, anorexia, and abdominal pain are also seen. Dogs are more commonly seen than cats, and young dogs are most commonly presented because of their inquisitive nature and propensity for getting into things.

In addition to foreign bodies, there are numerous other causes of gastrointestinal tract signs. In fact, vomiting and diarrhea are some of the most non-specific clinical signs seen in veterinary medicine. As such, if your pet is presented with vomiting and/or diarrhea, a full review of his or her medical history and a thorough physical exam will be required. Unfortunately, unless an owner observes a pet ingesting a foreign object or notices a household item missing, a patient’s history may be relatively unhelpful in determining the underlying problem. One of the important things to determine in reviewing the patient’s history is whether they are truly vomiting (an active process, which indicates a problem with the stomach or small intestine) or if they are regurgitating (spitting up, a passive process, usually implying esophageal dysfunction). A review of any previous illness and medications taken, as well as possible toxins in the household, are also important.

Just as medical history may be unhelpful, physical exam findings are often nonspecific, as patients may show no abnormalities, or may only show signs of dehydration and abdominal pain. In some cases, the veterinarian may actually be able to feel an abdominal mass, and in the case of cats who ingest string or yarn, a portion of the ingested object may remain wrapped around the base of the tongue. However, the non-specific nature of the history and physical exam findings make diagnostic testing very important in these patients.

Specific testing is guided by history and physical exam findings, but testing often begins with blood work and imaging, such as x-rays. Animals who have been vomiting will likely have lost hydrochloric acid (stomach acid), so may have a low serum chloride level and a high blood pH (alkalosis). Unfortunately, these findings do not help to determine the underlying cause of vomiting. Blood work may help to rule-out some other causes of vomiting, such as kidney and liver disease, but will not allow definitive diagnosis of a foreign body. This is where imaging becomes important. 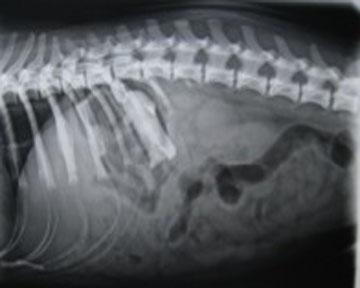 Radiographs (x-rays) should always be taken to rule-out GI tract obstruction, which is life threatening if not treated. Vomiting animals should have abdominal radiographs taken, while regurgitating animals should have chest x-rays taken. If it is not clear whether an animal is vomiting or regurgitating, or if no abnormalities are seen on examination of the first site, radiographs of both sites may be necessary. Radiographs may show the foreign body itself, but many foreign bodies will not show up because they shadow with the normal tissues. The veterinarian may only observe changes in the normal tissues that would be consistent with obstruction, namely focal dilation of the GI tract on the orad (towards the mouth) side of the obstruction. It is important to note that GI obstruction can also be caused by problems other than foreign bodies; these include tumors and intussusceptions, among other things. If plain x-rays are not sufficient to diagnose the underlying problem, specialized tests, such as contrast studies or ultrasound, may also be recommended.

If no obstruction of the GI tract is noted, the veterinarian may recommend conservative treatment and continued monitoring. This may include fluid therapy (intravenous or subcutaneous) and gastroprotective medications, with gradual reintroduction of water and food if no continued signs are noted and further diagnostics (and possibly surgery) if they are. Administration of anti-nausea medications are controversial, and many veterinarians feel that anti-nausea medications are contraindicated until there is definitive proof that GI obstruction is not present, as they may cover up clinical signs of obstruction.

If GI obstruction is suspected, the veterinarian will likely recommend further intervention. If a foreign body is suspected to be in the esophagus or stomach, it may be possible to remove the object with a scope. This will require anesthesia, but is much less invasive and has a quicker recovery than surgery. If the object cannot be retrieved with a scope, surgery will be recommended.

Foreign body surgery generally consists of an abdominal exploratory. If the bowel appears healthy, the object can usually be removed through an incision in the intestinal tract, termed an enterotomy. If the bowel is perforated or unhealthy, a portion of the bowel may need to be removed in a procedure called resection and anastomosis (R&A). However, not all segments of bowel can be removed, so treatment options will depend on the portion of intestine affected. 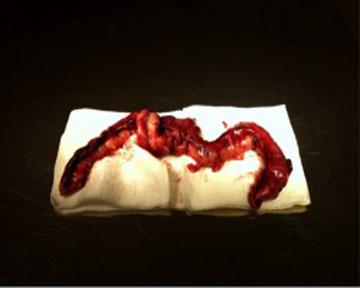 Uncomplicated bowel surgery and foreign body removal are generally low-risk,; however, if the bowel is damaged or perforated from the foreign body, or if there are complications from surgery, patients can be critically ill and may die. The biggest risk of gastrointestinal foreign bodies and GI surgery is leakage of intestinal contents into the abdomen, resulting in a condition called septic peritonitis. Patients with this condition, either pre-op or post-op, require intensive care and have a greatly decreased chance of survival. Following GI surgery, the most crucial period and the most worrisome period for leakage from the surgical site is about 3-7 days after surgery.

If a patient’s surgery for removal of a foreign body and the subsequent post-operative period are uncomplicated, they generally have a good chance of return to a normal lifestyle. However, owners must be careful to prohibit their pets from ingesting foreign objects, as pets may not be so lucky the next time.