Gastric dilatation-volvulus (GDV) is a life threatening condition that commonly affects dogs. The term “dilatation” refers to a condition in which the stomach becomes engorged with air and froth, swelling to many times its normal size. The term “volvulus” refers to the condition in which the stomach actually flips or twists on its axis, preventing the accumulated air and froth from escaping into the rest of the gastrointestinal tract. GDV is considered life threatening because the distended stomach places significant pressure on the great vessels of the abdomen and prevents blood return to the heart, leading to cardiovascular compromise and shock.

This animation demonstrates how the stomach stretches and twists, causing GDV or view the video here
Animation courtesy of Patterson Veterinary

Symptoms
GDV occurs quickly, and it is important for owners to be aware of the symptoms or signs associated with this condition. The most commonly affected dogs are large breed dogs with deep chests (German Shepherds, Great Danes, Irish Setters, Basset Hounds, etc), but any dog can develop GDV. Dogs typically act and appear uncomfortable, and may pace or whine with anxiety. Owners often report non-productive retching (trying to vomit without producing anything) and excessive salivation and drooling. An owner may even notice that their dog’s stomach appears distended or bloated. If any of these symptoms are seen, the dog should be taken to a veterinarian immediately for evaluation.

Diagnosis
The diagnosis of GDV relies on the combination of a veterinarian’s physical exam and x-rays. On physical exam, a veterinarian may note evidence of dehydration or signs of shock (rapid heart rate, weak pulses, pale gums, and difficulty breathing). An enlarged, gas filled stomach can often be felt on abdominal palpation. Radiographs (x-rays) of a dog’s abdomen will confirm the presence of a dilated and twisted stomach as GDV has a characteristic appearance (“double bubble” or “Popeye’s arm”) on radiographs (compare Figures 1 and 2). 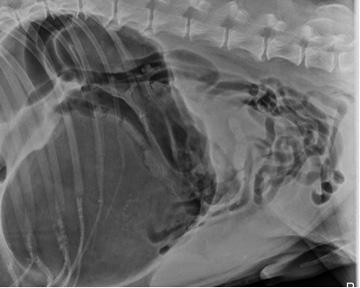 Figure 1. Abdominal radiograph of a dog with a gastric dilatation-volvulus. Note the large dark gas-filled stomach, as compared to Figure 2.

Treatment
Treatment for GDV initially includes patient stabilization, treating for shock, and decompressing the distended stomach. A veterinarian will need to either place a trochar (a hollow needle) into the stomach through the abdomen, or pass a tube down the esophagus and into the stomach in order to relieve the accumulated air. Treatment for shock includes intravenous fluid administration and drugs to regulate blood pressure. Once the stomach has been decompressed and the patient is stabilized, abdominal surgery is necessary to return the stomach to its normal position. Generally, the quicker the stomach becomes decompressed and the patient is taken to surgery, the better the outcome will be.
GDV surgery involves a long incision to gain access to the entire abdominal cavity. The stomach is rotated back to its normal position. If the condition is caught early and the pet is taken to surgery immediately, the stomach usually remains healthy and viable. However, if the stomach has been distended for a long time, parts or all of the stomach may become necrotic (dead). In mild cases the dead part of the stomach can be removed, but in severe cases euthanasia may be recommended. Occasionally, the spleen will also twist and will need to be removed. The surgeon will also evaluate all of the other abdominal organs for signs of disease during surgery.

Post-operative Care
After surgery, the dog will need to be monitored very closely in hospital. Blood electrolyte levels are monitored and corrected when abnormal. Abnormal cardiac rhythms are very common after GDV surgery, so heart rate and rhythm are carefully evaluated. Dogs are administered intravenous fluids, pain medications, and gastro-protective medications in the immediate post-operative period. Post-operative GDV patients remain in the hospital until they are stable and comfortable. Once home, strict exercise restriction is required to allow the incisions time to heal appropriately. Additionally, small, frequent meals are recommended to decrease the stress on the stomach in the immediate post-operative period.

Potential Complications
Post-operative complications can occur after GDV surgery. If parts of the stomach were dead at the time of surgery, and required resection, there is a potential for stomach contents to leak into the abdominal cavity and cause a condition called septic peritonitis. Septic peritonitis is a dangerous, and life threatening complication.
As mentioned earlier, some patients develop an abnormal heart rhythm after GDV surgery. This complication is often minor and does not require treatment, but occasionally it can be serious. If serious, treatment includes constant heart monitoring with an ECG (electrocardiogram) and medications to regulate the heart’s rhythm.

Prognosis
If surgery was uncomplicated (the GDV was caught early, surgery was performed quickly, and all of the stomach tissue was healthy), prognosis for survival is good. The dog may recover and go on to live a normal life. If surgery was complicated (stomach tissue was dead and required resection), prognosis for survival is poor, and the dog may not survive.
GDV is a potentially life-threatening condition for any dog, but quick recognition of the symptoms and immediate veterinary attention can bring favorable results. If you are concerned that your dog may have a GDV, do not wait. Contact a veterinarian immediately.