Degenerative myelopathy can occur in any breed although it is most commonly observed in German Shepherd Dogs; it has also been documented in the Welsh Corgi, Boxer, Rhodesian Ridgeback, and Chesapeake Bay Retriever to name a few.  There is no breed or sex predilection for this disease and it is most commonly observed in dogs older than 8 years old. 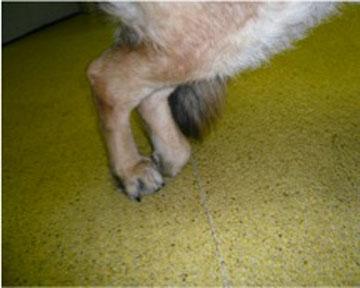 A patient with lack of conscious proprioception. This “knuckling” is an example of a neurologic deficit that is observed early in the disease.

Symptoms
Degenerative myelopathy has a chronic progressive insidious onset that at first may be only characterized as stumbling or incoordination in the rear limbs (ataxia) and knuckling.  As the disease progresses, animals may become weaker in the rear limbs progressing to paralysis in all four limbs.  The disease is non-painful  but can progress to urinary and fecal incontinence, difficulty chewing/swallowing food, and even respiratory paralysis.  Most owners elect to humanely euthanize for quality of life principles when pets become unable to walk in the rear limbs.

Diagnosis
Degenerative myelopathy is a presumptive diagnosis by exclusion; meaning that other diseases must be ruled out first.  Diseases with similary symptoms include intervertebral disc disease, fibrocartilaginous embolism, spinal trauma, discospondylitis, spinal cord cancer, hip disease (dysplasia, arthritis, etc), and other orthopedic abnormalities. Diagnostic tests that may be performed to rule out other conditions include bloodwork, x-rays, CT scan, MRI, and/or cerebrospinal fluid analysis among others.  The only way to obtain a definitive diagnosis of degenerative myelopathy is with biopsy samples from the spinal cord; unfortunately these samples are only obtainable on a post mortem (after death) examination.  In 2009 a paper was published that identified a genetic mutation in a gene that codes for an enzyme (superoxide dismutase-1) that strongly correlates with degenerative myelopathy.   However, animals have tested positive for the mutation without clinical signs of degenerative myelopathy.  Additionally, animals have tested negative for the mutation and were later definitively diagnosed with degenerative myelopathy post mortem.  This is an active area of research and holds much potential for the future. 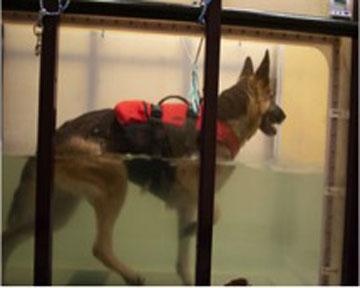 Treatment
Unfortunately, there is no cure for degenerative myelopathy; nothing has been shown to stop or reverse clinical signs.  Exercise and physical therapy have been beneficial in pets with degenerative myelopathy.  Rehabilitative therapy improves the pet’s conditioning and circulation while preventing muscle loss and even building muscle mass.  Exercise should consist of regular, continuous, controlled activity; simply allowing free roam of the backyard is not sufficient.  Studies have shown a longer period of ambulation and longer survival times in pets receiving physical therapy.  Besides exercise, most therapies are directed towards supportive care and maintaining quality of life.  These include carts to assist in walking, soft bedding to prevent bed sores, regular urinary bladder expression and diligent cleanliness.