Cranial cruciate ligament (CCL) disease is the most common orthopedic disease in dogs ( see CCL Overview Section ).  The CCL is located inside the knee and functions to stabilize the knee during locomotion. Because the articular surface of the canine tibia (shin bone) is sloped backward, normal locomotion leads to forward translation (tibial thrust) of the tibia with relation to the femur (thigh bone). An intact CCL will maintain stability of the knee, but a damaged or torn CCL will lead to abnormal motion such as tibial thrust. This instability can lead to lameness, osteoarthritis, abnormal cartilage wear, and/or meniscal injury. There are three primary methods of extra-capsular CCL stabilization offered at the DVSC.

Below is a picture of the stifle and associated structures mentioned above. 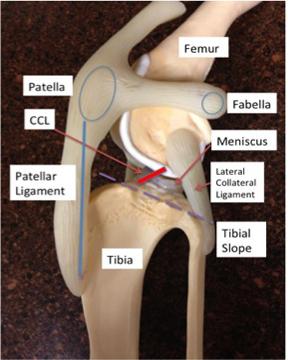 The LFS procedure is one of the most common orthopedic procedure performed at DVSC for small dogs with CCL disease. The LFS is a sterile suture material (medical grade monofilament nylon) that is implanted in the knee to mimic the actions of the CCL (restrict tibial thrust and internal rotation). Over time, the LFS will induce scar tissue formation that also helps stabilize the joint.

The LFS procedure can be considered for any dog with CCL disease, but recommendation for its use depends on size, age, condition, tibial slope, and activity level of the dog. The LFS is usually recommended for small-breed dogs as implantation into larger breeds are thought to be more prone to failure. A surgeon at DVSC may make the recommendation for a LFS after full assessment of the patients’ history and condition.

The LFS procedure involves an incision over the inside or outside aspect of the knee (surgeon dependent). The joint is explored (arthrotomy) to examine the CCL, assess arthritis, and look for any meniscal injury.  If there is a meniscal injury, the meniscus is partially removed.  An intact meniscus may also be surgically “released” as a prophylactic measure against future injury (surgeon dependent).  Next, a sterile suture is selected depending on the size, age, and activity level of the patient. The suture is passed around the fabella and through a tunnel created in the tibia. The suture is then tightened to stabilize the knee. See figure below. 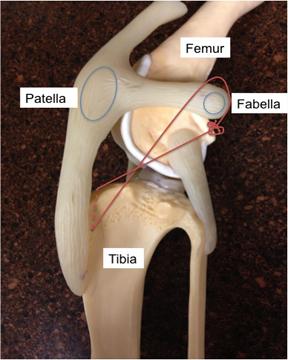 The Tightrope® procedure is a less commonly used method of stabilization at the DVSC but may be recommended for certain patients. The Tightrope® is an implant developed by Arthrex Vet Systems and is made of a kevlar-like material called FiberTape®.  The Tightrope® uses FiberTape®, toggle buttons,and specifically drilled bone tunnels to stabilize the knee.

The Tightrope® can be considered for any dog with CCL disease, but recommendation for its use depends on size, age, condition, tibial slope, and activity level of the dog. The Tightrope® may be an alternative technique for medium to large-breed dogs that are poor candidates for the TPLO (see CCL TPLO Section).  A surgeon at DVSC may make the recommendation for a Tightrope® after full assessment of the patients’ history and condition.

The Tightrope® procedure involves an incision over the inside or outside aspect of the knee (surgeon dependent). An arthrotomy and meniscal evaluation is performed as described under the “LFS Procedure” section. Next, two bone tunnels are drilled, one through the femur and one through tibia, both at very specific locations and orientations. The FiberTape® is passed through both these tunnels and anchored at each end using toggle buttons. The FiberTape ® is tightened at the tibial exit point until the knee is palpably stable.  See figure below.

A bone anchor stabilization can be considered for any dog that is also a candidate for LFS. As such, bone anchors are usually recommended for smaller breed dogs but recent studies have show them to be effective in large-breeds as well. Again, recommendation for this implant depends on each individual patient. When placed properly, this technique stabilizes the knee while also potentially reducing inflammation and restriction on range-of-motion that may be seen with the LFS.

The bone anchor procedure involves an incision over the inside or outside aspect of the knee (surgeon dependent). An arthrotomy and meniscal evaluation is performed as described under the “LFS Procedure” section. Next, a bone anchor/FiberWire® is screwed into the distal aspect of the femoral condyle. A bone tunnel is then created through the tibia and the FiberWire® is placed through the tunnel. The FiberWire® is anchored on the other side of the tibia by a toggle button and then tightened until the knee is palpably stable. See figure below. 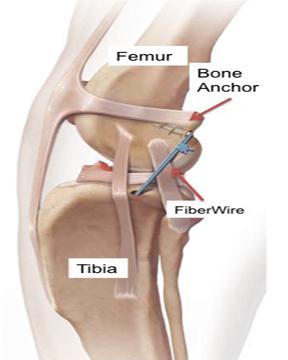 A DVSC surgeon can help you determine which of the extra-capsular techniques are best suited for your dog.

Activity Restriction – The post-operative recovery period usually lasts for about 8 weeks. During this period, the patient needs to have their activity restricted as to not cause complications with the stabilization. Too much activity can lead to implant failure, meniscal injury, and pain. The DVSC usually recommends confinement (crate, kennel, enclosure, small room), leash walks only, no jumping, no playing, no climbing, and no running for the majority of the recovery period. As the patient recovers, the surgeon will implement gradual return to normal activity.

Incision Care – It usually takes about 2-3 weeks for the incision and soft tissues to heal. During this time, it is important to monitor the incision for any excessive swelling, oozing, or incisional dehiscence (opening up). We also recommend an E-collar (cone) placed around the dogs’ head in order to keep them from chewing or licking at the incision. Licking or chewing at the incision can lead to dehiscence and/or infection of the site, which can be a serious complication especially if infection reaches the implant.

In addition, cold and/or warm compress may be implemented to decrease incisional swelling.

There is usually a good, if not excellent, prognosis for dogs undergoing extra-capsular stabilizations.  Veterinary studies have compared extra-capsular techniques but there is no consensus on superiority of one technique over another. The overall prognosis is patient dependent and can be assessed by a surgeon at DVSC.