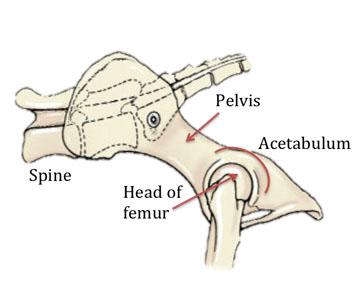 The majority of hip luxations occur secondary to a traumatic event but it has also been documented secondary to severe hip disease.  The hip will most commonly luxate craniodorsally (up and forward) but can also luxate caudoventrally (down and backward).  When the hip becomes luxated there may be damage to the joint capsule, surrounding tissues, and cartilage that needs to be addressed early.

Diagnosis
Diagnosis of a hip luxation is made through appearance of the limb, physical exam, and hip radiographs (X-rays).  Radiographs of the hip are also important to rule out other conditions such as pelvic fractures, femoral fractures, and/or hip disease. Below is a radiograph of a craniodorsal hip luxation. The left side is a hip in the normal position. 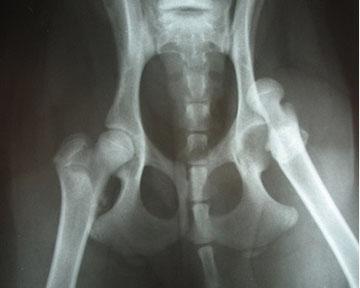 Treatment
There are several treatment options for hip luxation that are mainly dependent on chronicity, direction, and severity of injuries. Some hip luxations may be treated non-surgically, but others require surgery.  Surgical reduction has been shown to have a much higher success rate.

The non-surgical route requires the luxation to be reduced ideally within 72 hours of the injury by an experienced veterinarian, and with the patient under general anesthesia. Reduction of the hip is significantly more difficult and may have a higher chance of failure after the first 72 hours.  Usually less than 50% of non-surgical reductions will stay in place and heal properly.  If non-surgical reduction is successful, an Ehmer sling is placed for approximately 2 weeks with frequent rechecks to confirm proper hip position and healing.  A patient with an Ehmer sling over the left back leg is shown below. 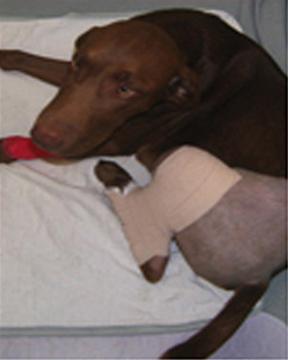 If the hip cannot be reduced initially or continues to re-luxate, surgery is necessary. In surgery, the hip is reduced and then stabilized with techniques such as toggle-rod fixation, capsular repair, prosthetic capsule placement, fascia lata stabilization, and/or an extra-articular suture technique. Other possibilities also include femoral head ostectomy (FHO) or even a total hip replacement. Surgical versus non-surgical reduction should be determined after careful examination by an experienced veterinarian or veterinary surgeon.

Capsulorraphy: In this procedure, the capsule that covers the hip joint is repaired primarily with suture material. This procedure is often combined with other forms of fixation in order to aid in the reduction of the hip. The capsulorraphy may only be possible in certain situations because damage or certain tears of the capsule may not allow proper closure. 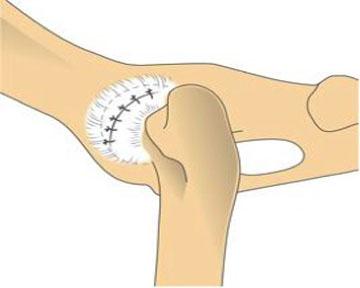 Toggle-Rod Fixation: In this procedure the hip is kept reduced with toggle pins secured to a strand of suture. A toggle pin is placed medial to the acetabulum (inside the pelvis) via a hole drilled through the center of the acetabulum. A bone tunnel is then drilled from the attachment point of the round ligament on the femoral head through the femoral neck and exiting just distal to the trochanter. The strands of suture are passed through this tunnel, the hip is reduced, and the strands are tied around a second toggle pin along the lateral femoral cortex. An image of the procedure is shown below. 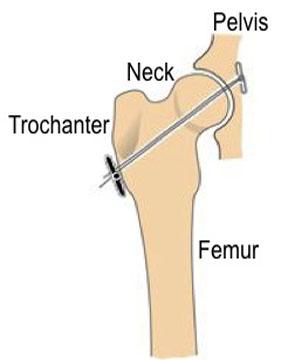 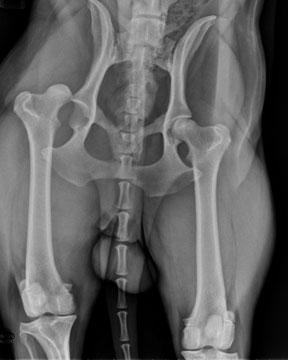 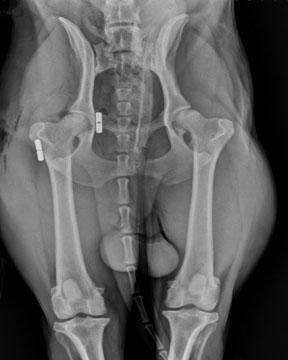 Prosthetic Capsule: In this procedure a prosthetic capsule is created using bone screws, washers, and suture material. The bone screws/washers (usually 2) are screwed into the pelvis just above the rim of the acetabulum. A bone tunnel is created in the femoral neck, which is the segment of bone between the femoral head and the femur itself. The suture material is anchored around the screw/washer, threaded through the bone tunnel and tightened in a figure 8 pattern. An image of the prosthetic capsular repair with bone screws and washers is shown below. 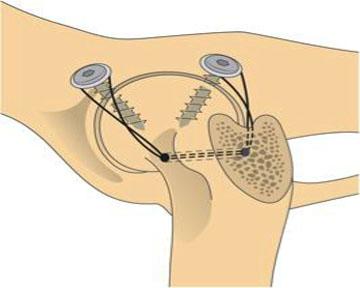 Postoperative Care
After reduction, whether surgical or non-surgical, the affected limb is often placed in an Ehmer sling to keep the hip in place and prevent weight bearing for at least 2 weeks.  The sling should be kept clean and dry and must be closely monitored for slipping or irritation to the skin. Superficial skin infections and irritation (minor complications) can occur with long-term use of these bandages.

Patients must be kept indoors on a non-slick surface and be confined to a kennel, enclosure, or a small room.  Running, jumping, climbing stairs, or playing with other pets/people should not be allowed for at least 4-6 weeks. The patient may be taken outside as frequently as necessary to eliminate, but they must always be kept on a leash and their activity kept to a minimum. After a few weeks, the activity can be gradually increased depending on recovery and recommendations from the veterinarian. Careful and strict convalescence is crucial for the postoperative outcome of the procedure.

Prognosis
Prognosis for successful outcome depends on severity of injuries, chronicity, and treatment chosen. A veterinary surgeon can help assess prognosis on a case-by-case basis.