Atlanto-axial (A-A) instability is generally seen in juvenile toy breeds due to congenital malformation or absence of the dens and/or associated ligamentous structures. A-A instability is occasionally seen in other breeds due to trauma. Patients will often present with neck pain, weakness and occasionally paralysis. Surgical stabilization of the A-A articulation is the treatment of choice. A temporary neck bandage/brace will alleviate clinical signs, and can be used until surgery is scheduled. 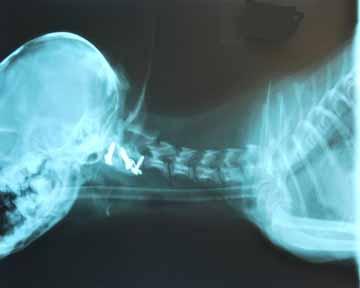 Either a dorsal, ventral, or combined dorsal and ventral technique can be used to stabilize the vertebrae. Dorsal stabilization is achieved by placing a non-absorbable monofilament suture between the dorsal lamina of C1 - C2. The monofilament suture can pull through the thin bone resulting in recurrence of instability and neurological dysfunction. Ventral stabilization involves removing the articular cartilage of the C1-2 articulation and placing a cancellous bone graft into the joint space. Small threaded pins or screws are placed using bone cement over the heads of the pins/screws to further augment the fusion. Eventually the C1-2 articulation is fused with the ventral technique resulting in a mechanically superior outcome. If substantial displacement of the C1 and C2 vertebral bodies is present, the dorsal procedure is initially done to realign the vertebra, followed by a ventral fusion.

Overall the prognosis for an A-A instability is favorable, though prognosis is guarded with more severe neurologic dysfunction.  The dorsal technique is safer and technically easier to perform but also has a higher failure rate. The DVSC recommends performing a ventral fusion for a more permanent repair. We generally use fluoroscopy for safe placement of pins and screws across the C1-2 articulation.

View/download this topic in our newsletter, Cutting Edge, Fall 2007.