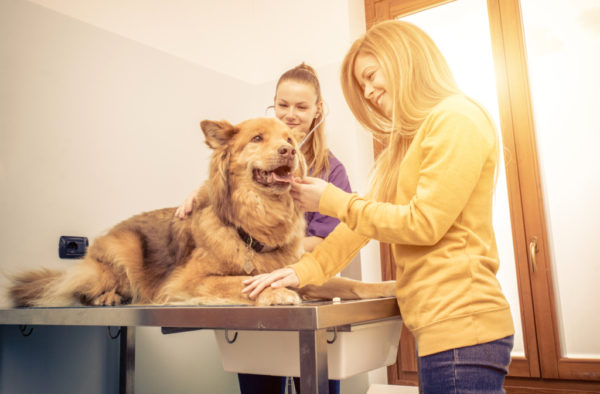 Your dog’s knees support his weight and absorb shock from all his movements every day. When a knee injury occurs, pain and discomfort interfere with every step. The two most common knee injuries that affect dogs are cranial cruciate ligament rupture and patellar luxation, and both occur in the rear legs. Although both injuries cause lameness, the causes, clinical signs, and treatment options are different for each injury.

What is my dog’s cranial cruciate ligament (CCL)?

How does a dog rupture his cranial cruciate ligament?

Cranial cruciate injuries are the most common cause of hind-limb lameness in dogs. Rupture can occur as a sudden, acute injury, or as chronic, progressive degeneration. However, dogs who experience acute rupture likely have some degree of degeneration that has predisposed the ligament to sudden injury.

Acute or traumatic cranial cruciate ligament injury often occurs during activity, such as running or jumping, or when a dog suddenly changes direction and the knee twists abnormally. Most of the dog’s body weight is suddenly placed on the cruciate ligaments, exposing them to excessive rotational and shearing forces. The front, or cranial, ligament is most likely to rupture. ACL ruptures that human athletes experience are similar.

The chronic form of cranial cruciate disease is caused by a progressive ligament weakening and degeneration. The ligament may initially be stretched or partially torn, and continued trauma or arthritis causes disease progression until complete rupture occurs.

What are the signs of a cranial cruciate rupture?

Cranial cruciate ligament rupture is intensely painful, and affected dogs often cry out, fall to the ground, and become acutely lame. Dogs typically cannot bear any weight on the injured leg, and may hold the leg up or toe-touch while walking. However, this initial lameness and pain will sometimes  appear to “improve” after the inflammation from the acute injury subsides. Unfortunately, because the instability in the joint remains, the injury will continue to damage the knee until surgical intervention occurs. Additionally, in some cases dogs will only show occasional lameness, or lameness after activity, even with a torn ligament. If your pet is limping, veterinary evaluation is important to determine if a serious injury like a cruciate rupture has occurred.

Which dogs are at risk of cranial cruciate ligament rupture?

Cranial cruciate ligament injury affects dogs of every age and size, with obese and large-breed dogs having a higher risk. A higher incidence also occurs in specific breeds, including:

What is my dog’s patella?

Your dog’s patella, or knee cap, is the largest sesamoid bone in his body, and is embedded in the tendon of the quadriceps muscle. The patella is situated in the femoral groove in the distal end of the femur, and moves up and down in the groove as the knee joint is flexed and extended.

What is patellar luxation?

Patellar luxation, or dislocation, occurs when the patella rides outside the femoral groove during flexion, and deviates either laterally (outside) or medially (inside), though by far the most common deviation is medial. Patellar luxation ranges in severity from mild luxation that occurs only during flexion, to permanent luxation with contracture of associated muscles and tendons.

What are the signs of patellar luxation in dogs?

Dogs with patellar luxation experience lameness of varying severity and consistency. In the early disease stages, dogs will often carry the affected leg when the patella moves out of the femoral groove, and use it normally when the patella goes back into the groove. Intermittent lameness becomes more consistent as dislocation becomes more permanent. In at least 50% of cases, patellar luxation occurs in both knees.

Which dogs are at risk of patellar luxation?

Patellar luxation is most common in small dogs, with an increased risk in the following breeds:

If you have questions about your dog’s knees, contact your family veterinarian for an initial examination. If your pet is referred to DVSC’s surgeons for knee surgery, contact our orthopedic surgery department for a consultation at one of our locations in East Dallas, North Dallas, Fort Worth, Plano, and Grapevine.